Olivier salad is a traditional salad dish in Russian cuisine, which is also popular in many other Eastern European countries, Iran, Israel, Mongolia and also throughout Latin America.

In Russia, Ukraine and other post-Soviet states the salad has become one of the main dishes on zakuski tables served during New Year's Eve (Novy God) celebrations.

The original version of the salad was invented in the 1860s by a cook of Belgian origin Lucien Olivier, the chef of the Hermitage, one of Moscow's most celebrated restaurants. Olivier's salad quickly became immensely popular with Hermitage regulars, and became the restaurant's signature dish.

The exact recipe — particularly that of the dressing — was a jealously guarded secret, but it is known that the salad contained grouse, veal tongue, caviar, lettuce, crayfish tails, capers, and smoked duck, although it is possible that the recipe was varied seasonally. The original Olivier dressing was a type of mayonnaise, made with French wine vinegar, mustard, and Provençal olive oil; its exact recipe, however, remains unknown.

At the turn of the 20th century, one of Olivier's sous-chefs stole the recipe and sold it to various publishing houses, which contributed to its popularization. Due to the closure of the Hermitage restaurant in 1905, and the Olivier family's subsequent departure from Russia, the salad could now be referred to as Olivier. 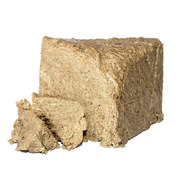