Caramel "Alenka" is an unexpected incarnation of a familiar brand from childhood. Fragrant creamy caramel, crispy and supple, with subtle vanilla notes in aroma and taste, hides a delicate creamy condensed milk filling and hints of creme brulee on the palate. A great addition to tea and coffee. 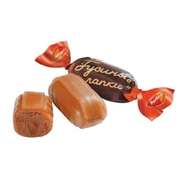