Caramel with chocolate and nut filling from selected roasted almonds and cocoa with caramel mass. 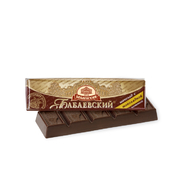