The peculiarity of the classic "Pinocchio" lemonade recipe is in the ideal proportions of sour and sweet ingredients, which, thanks to the use of quality natural ingredients, are revealed in a unique bouquet of bright taste, complementing each other and giving us the taste of Soviet lemonade. The combination of citrus flavors, perfectly quenches thirst and gives the drink a refreshing effect. The traditional recipe for the preparation of the drink combines natural raw materials - a blend of oranges and lemons, apple juice, pure artesian water and sugar, and strict adherence to production technology preserves useful substances.

The history of the lemonade "Buratino" began in pre-revolutionary Russia. Then the drink was called simply "Lemonade", for its preparation, it required lemons, oranges, apple juice, sugar and water. This lemonade was stored no more than a day. Its "fabulous" name of lemonade "Pinocchio" was received much later, in the USSR. On an industrial scale, the drink began to be produced in the 1970s and then the lemonade of "Pinocchio" became the most common non-alcoholic soft drink among Soviet children. 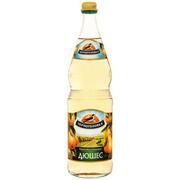